Named after philanthropist Jack Benaroya and constructed in 1998, the Benaroya Hall is unique for its highly technical and innovative architecture. Designed by the LMN Architects of Seattle, with Magnusson Klemencic Associates as structural engineer. In 2001, the building won the National Honor Award from the American Institute of Architects.

Occupying an entire city block in the heart of downtown Seattle, the the Benaroya Hall is situated directly above the Great Northern Tunnel, through which runs the main railway line through the city, and is adjacent to the Downtown Seattle Transit Tunnel, which contains a rail station. Ingenious architectural design prevents noise from the trains being an issue; the hall sits upon rubber pads that insulate it from the building’s outer shell.

Since its construction, the Benaroya Hall has served to double the budget and number of performances of the Seattle Symphony, as well as serve as a major draw for visitors to Seattle. 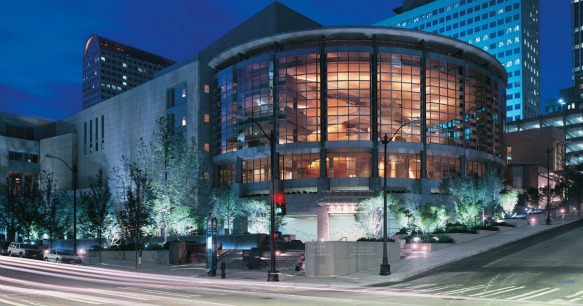